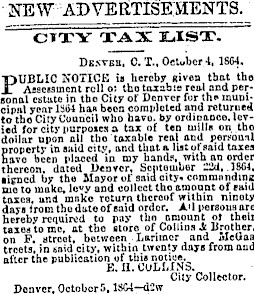 The Historic Society got a call from the Colorado Tree Coalition. Did the society know anything about the two champion oak trees in Englewood? They appeared to have been planted about 1870? Englewood has the #3 and #5 most famous Bur Oak trees in Co. They are each about 11 feet in diameter.

My exploration of that question opened up a part of Englewood history I knew nothing about. It led me to the Union Avenue Bridge across the Platte River.

Mr. McBroom came to the area in 1857 and built a cabin along Bear Creek. Peter Magnus established Petersburg 1860. Tom Skerritt built the first house in what became Englewood in 1860.  That same year, Joseph and Samuel W. Brown arrived.  They were not miners, rather farmers. They looked for a place along the Platte River to make a farm.

Gold was being mined in Central City and Idaho Springs in 1859 and some miners hiked across the continental divide and found gold in the area of Fairplay in South Park.  There was another gold hunting area. The territorial government decided it was impossible to build a road across the continental divide and authorized a wagon road along the east side of Platte River which crossed the Platte River on a toll bridge at Union Ave. in Englewood. You had to pay money to use it. The money was used to maintain it and pay the people who worked on it.  The road was heavily used until the Denver South Park and Pacific Railroad was built in 1878.

The prices: Wagon or stage-coach 25-cents, horse 10-cents, cows with horns 5-cents, and people were free. That bridge was the first bridge across the Platte south of Denver. The wagon road would be called the Denver, Auraria and south Park Wagon Road aka Bradford toll road. It was a toll road.

The Brown brothers saved some of the money and used it to buy property in the Platte Valley from Bowles to Oxford and Lowell to Santa Fe except what was owned by McBroom and Magnus. The Browns built an irrigation ditch. You can find it on old maps. It ran from Bowles Avenue to about Oxford Ave. The ditch irrigated the ground and provided power for the flour mills along the river. The big trees were planted along the Brown ditch. The Browns grew wheat, sugar beets, raised beef cattle and milk cows and vegetables to feed the miners and the exploding population in Denver.  The milk was later sold to Meadow Gold Dairy when it opened in the 1890s.

Joseph and Samuel Brown join Tom Skerritt, McBroom, Jacob Jones and Peter Magnus who established the foundation for our City.

The two trees are at 3026 W. Stanford Ave and 3054 W. Tufts Ave. The owners of the homes do not want people coming into their yards to look at the trees.