A cancer diagnosis brings EHS together to support a student 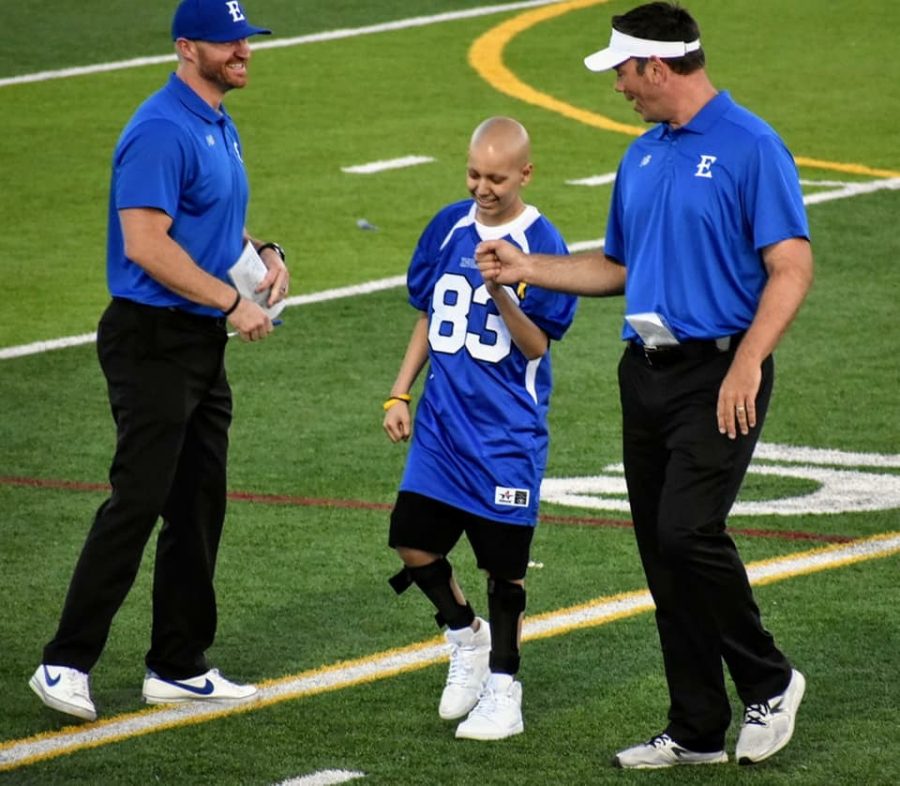 Victor Alfaro is honored during the coin toss before the homecoming game against Denver West.

All of our students here at EHS have something to offer, but there are some who show strength far beyond their years. This is a story of a very special student who once walked the halls of Englewood High School. He is now too weak to sit in classes all day. The Pirateer staff believes his story is a remarkable one and wanted to share his thoughts and emotions about his past, his current battles and his fears.

Victor Alfaro is a freshman who is fighting Stage 4 Rhabdomyosarcoma or RMS. Sarcomas are cancers that develop from connective tissues in the body, such as muscles, fat, bones, the linings of joints, or blood vessels. Rhabdomyosarcoma is a type of cancer that turns cells that normally develop into skeletal muscles into cancer.

According to www.sarcomahelp.org, there are only about 350 cases of RMS diagnosed each year in the United States in children under the age of 21. About four children per one million healthy kids under the age of 15 will develop RMS each year. It is slightly more common in boys than in girls.

Alfaro is relatively new to EHS coming from the Denver area, “My name is Victor M. Alfaro Jr. I was named after my dad and I am the oldest of 4 boys and was born in Denver Co. I went to Fairview elementary school until the 3rd grade and went to force elementary for the remaining time. I wanted to get into DSST CollegeView but didn’t get in right away because of the waitlist, I ended up getting called the first week of school. I went to DSST CollegeView for 6th, 7th and the beginning of 8th grade until I was diagnosed on Sept 21st. 2017.”

He changed to DSST around that time, “where my mom works as a registrar so she can be near me if needed. I ended up on homebound services due to my treatment keeping me down. I played sports for PYS and knew all my teammates were going to Englewood HS so when we decided I would be going back to school for a social life my parents and I decided Englewood HS was the best place for that.”

He describes himself as a student everyone gets along with, “A friendly one who talks to everyone and loved math. I was in honors math all of middle school.”

He had a normal life, “Busy, I loved to play sports and loved school so I was always doing something.”

He enjoyed many things a typical boy would, “Play sports my favorite sports was football, basketball, and baseball. I was the best at baseball.”

Alfaro received life-changing news a little more than a year ago, “September 21st, 2017 when I was diagnosed with stage 4 rhabdomyosarcoma.”

Since the diagnosis, his life has been a battle, “Tough!!! Everything about cancer has been hard. My physical, emotional and mental state have all been a battle within itself.”

Explaining his illness to friends is complicated, “I mainly say I have stage 4 cancer. Before my terminal diagnosis, I would say that I am beating cancer and the conversations were all good. Now I don’t tell people much.”

He wants fellow students to know he is a fighter,  “That I have fought with everything in me. From the moment I was diagnosed I considered myself a survivor and no matter what happens I want my friends and family to know that I never gave up!”

He still enjoys picking on his brothers and playing video games. But like the obstacles in the games, he can’t outrun this real-life challenge, “I learned that no matter the obstacle that comes about never lose your will to fight. There were many times I wanted to give up but I always knew that I was put on this earth for a purpose.”

Even though facing the end of his life might terrify most students, he has moved past being afraid, “No. I have fought with everything I have for a whole year. What is happening to me is not due to my lack of fight or my willingness to overcome cancer. I have given my all and I will continue to fight until I can’t anymore.”

He is so grateful to EHS students for the warm letters and kind wishes, “I think that it is very generous of the school to keep me so close and community-based even though I didn’t go to school for very long.”

Even though Alfaro has spent a short time at Englewood, his passion for the students and staff here made a lasting impression, “Honestly, the Englewood community has been the most supportive to myself and my family since the day I was diagnosed from the homecoming games, including me in the parade, the financial support, my teams support and the school support with acceptance I don’t think there is more you all can do. I appreciate you all from the bottom of my heart.”